Addiction and Substance Use Disorders 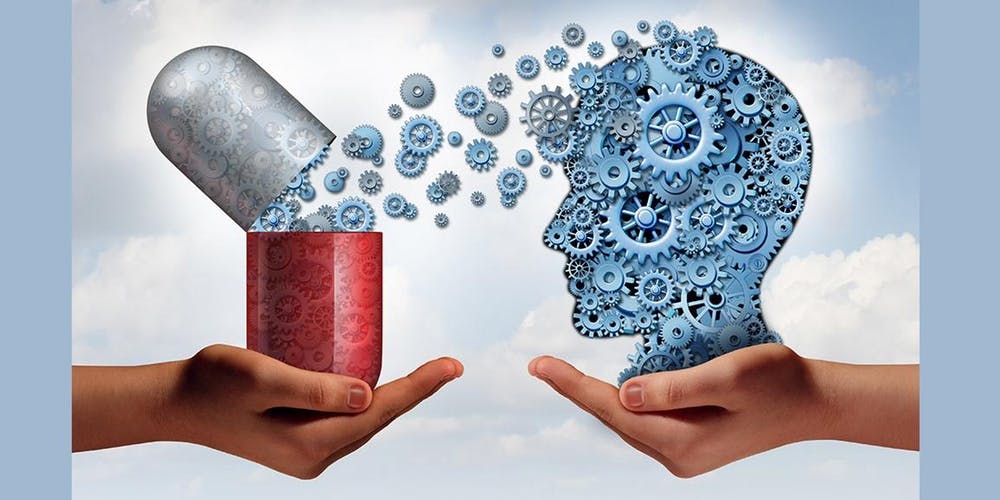 Addiction and Substance Use Disorders

Addiction is a complex condition, a brain disease that is manifested by compulsive substance use despite harmful consequences. People with addictive (severe substance use disorder) have an intense focus on using a certain substance(s), such as alcohol or drugs, to the point that it takes over their life. They keep using alcohol or drugs even when they know it will cause problems. Yet a number of effective treatments are available and people can recover from addiction and lead normal, productive lives. Source

Many who develop substance use problems have depression, attention deficit disorder, post-traumatic stress disorder, or another mental problem. A stressful or chaotic lifestyle and low self-esteem are also common.

Children who grew up seeing their parents use drugs may have a high risk of developing substance use problems later in life for both environmental and genetic reasons. There are several stages of drug use that may lead to addiction. Young people seem to move more quickly through the stages than do adults. 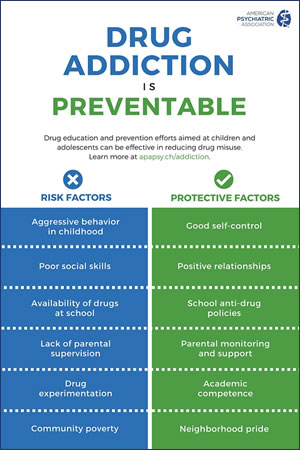 Addiction can start with experimental use of recreational drug in social situations, and, for some people, the drug use becomes more frequent. For others, particularly with opioids, Drug addiction begins with exposure to prescribe medications, or receiving medications from a friend or relative who has been prescribed the medication.

The risk of addiction and how fast you become addicted varies by drug. Some drugs, such as opioid painkillers, have a high-risk and cause addiction more quickly than others.

As time passes, you may need larger doses of the drug to get high. Soon you may need the drug just to feel better. As your  Drug use increases, you may find that is increasingly difficult to go without the drug. Attempts to stop drug use may cause intense cravings and make you feel physically ill (withdrawal symptoms).

You may need help from your doctor, family, friends, support groups or an organized treatment program to overcome your drug addiction and stay drug-free.

Signs and symptoms of drug use or intoxication may vary, depending on the type of drug. People struggling with addiction usually deny their drug use is problematic and are reluctant to seek treatment. Like many health disorders, several factors may contribute to the development of drug addiction. The main factors are:

Environment. Environmental factors, including your family believes in attitudes and exposure to peer group that encourages drug use, seem to play a role in initial drug use.

Genetics. Once you started using a drug, the development into addiction may be influenced by inherited (genetics) traits, which may delay or speed up the disease progression.

Physical addiction appears to occur when repeated use of a drug changes the way your brain feels pleasure. The addicting drug causes physical changes to some nerve cells (neurons) in your brain. Neurons use chemicals called neurotransmitters to communicate. These changes can remain long after you stop using the drug.

People of any age, sex or economic status can become Addicted to a drug. Certain factors can affect the likelihood and speed of developing an addiction:

Family history of addiction. Drug addiction is more common in some families and likely involve genetic predisposition. If you have a blood relative, such as a parent or sibling, with alcohol or drug addiction, you are at greater risk of developing a drug addiction.

Mental health disorder. If you have a mental health disorders such as depression, attention-deficit/hyperactivity disorder (ADHD) or post-traumatic stress disorder, you are more likely to become addicted to drugs. Using drugs can become a way of coping with painful feelings, such as anxiety, depression and loneliness, and can make these problems even worse

Peer pressure. Peer pressure is a strong factor in starting to use and misuse drugs, particularly for young people.

Lack of family involvement. Difficult family situation or lack of a bond with your parents or siblings may increase the risk of addiction, as can a lack of parental supervision.

Early use. Using drugs at an early age can cause changes in the developing brain and increase the likelihood of progressing to drug addiction.

Taking a highly addictive drug. Some drugs, such as stimulants, cocaine or opioid painkillers, may result in faster development of addiction than other drugs. Smoking or injecting drugs can increase the potential for addiction. Taking drugs considered less addicting – so-called “light drugs” – can start you on a pathway of drug use in addiction.

The best way to prevent an addiction to a drug is not to take the drug at all. If your doctor prescribed a drug with a potential for addiction, use care when taking the drug and follow the instructions provided by the doctor.

Doctors should prescribe these medications at safe doses and amounts and monitor their use so that you’re not given too great a dose or for too long a time. If you feel you need to take more than the prescribed dose of the medication, talk to your doctor.

Striving For New and Improved Treatment and Cures, How We’re Making a Difference

There are so many variables when discussing substance use disorders and other mental health illnesses. Shedding light on just a few to bring awareness to the possibility of newer, more advanced and better treatments and one day even cures is what… LifeInSight Biotherapeutics Foundation, a 501(c)(3) non-profit organization has set out to do. More than bringing awareness, LifeInSight Biotherapeutics was established to fund collaborative research designed to optimize treatments for mental illness and substance use disorders.